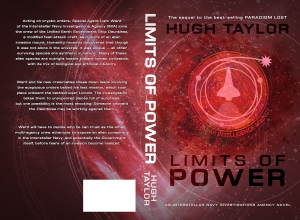 The cover is here, thanks to Dave Mickolas of Universal Book Covers! The book should be available for pre-sale by Halloween in both paperback and e-book formats.

I have a draft of the cover for Limits of Power, which I really like. It’ll be ready to share after a few little tweaks. Book 3 is actually coming along well already, too. I don’t have a schedule for it, but I’m making more progress than I anticipated. Though, I will have to take a break from it when LoP comes out of editing. I still hope to have it available for pre-sale by Halloween!

I finally settled on a title for the sequel to Paradigm Lost, which will be Limits of Power. I’m putting the final pre-editing touches on it over the next few days. I admit, I had some concerns about this book at first; but it’s really coming together the way that I wanted it to, and I think that if you enjoyed PL, you’ll enjoy this too. I won’t have an official release date until it’s out of editing, but I expect it to be available for pre-sale around Halloween and for sale before Thanksgiving, in both digital and paperback formats. The cover art might follow soon; I’ll post that as soon as I have it. Again, thanks for reading!

Words have been written. I didn’t intend to start so soon, but I couldn’t help myself. I have no idea what the timeline will be on this one, since I’m still in the editing phases of Book 2 (which also still needs a title) and I decided to finish a Computer Science degree over the next two years, also on the side. Not to mention, I like to spend time with my family when I’m both home and conscious, and my sweetheart of a Rottweiler mix is guilting me right this very second. I also want to do a little bit more research for some aspects of Book 3.

The good news is that, basically by the time I was done with Chapter 2 of the sequel, I already knew what I wanted to do with Book 3. So I’ve had plenty of time to think about it and I definitely know where it’s going, which usually means the book gets written faster. Though, with 1.926 books to my name, I don’t exactly have a large basis for comparison.

I just finished the draft of Book 2, which is now in its final ‘pre-editing’ stage. It will go to Monique Happy Editorial Services at the end of the month and should be available for pre-sale by the end of October, with a launch date right before Thanksgiving. I can’t wait, and I hope you like it!

I had to push my Book 2 dates back about a month, but I am back in the swing of things and making good progress. I’m hoping to have it available for pre-sale on Amazon in late October of this year, with it going on sale around Thanksgiving. There should also be a paperback version available from Day 1 for those of you who prefer that format (and for a small additional fee, I believe you can have both versions).

I still don’t have a title for it (I’m actually horrible at naming things for some reason), but it’s been really fun to write so far. I hope you enjoy the ride!

When I first had the idea that ultimately became Paradigm Lost, I struggled with how much science to put into it. I did some research into contemporary science’s opinions on the future of space travel and found it fascinating.

So fascinating that for weeks, maybe months, I made no progress on actually writing the book.

As Interstellar pointed out, time is a resource. Working full-time, commuting 3-4 hours per day (Oh, the joys of DC…), having a family, and going to school only leave so much time for me to pursue writing. But that is not the main reason I decided to limit the amount of science. I would’ve spent as much time researching and writing the book as required to produce the type of product that I wanted–not just because it represents me, but I want you to enjoy it and to get your money’s worth. Most people work hard for their money, and I respect that people are taking a chance spending it on my book. I want to write books that are worth your money and your time, regardless of my day-to-day constraints–those are my challenges, not yours.

That being said, I really struggled on the amount of science that would be in the book; but let me backtrack for a second. This single piece of advice has affected me more than any other:

“My most important piece of advice to all you would-be writers: When you write, try to leave out all the parts readers skip.”
― Elmore Leonard, Elmore Leonard’s 10 Rules of Writing

Obviously, that advices requires you to be accurate in an area that is largely subjective; it is no easy task. But if I found that I was bored writing a part of the book, then I doubted you would enjoy reading it. This advice had effects at a higher level, too: What was important to the story?

SPOILER ALERT – Do not read any further if you haven’t read Paradigm Lost.

I could be wrong, but I think I had an original idea (at least, I haven’t seen it anywhere): What if the sole purpose (or at least the end result) of biological evolution was to spawn a superior, artificial species?

If creating truly sentient artificial life is possible, and I suspect that it is, then I hope we approach it with caution (e.g., the ‘Sinclair Chip,’ no direct connections to networks, etc.). Having AIs limited to human-ish bodies with no wired or wireless connectivity would help to limit the playing field; they’d be able to type faster, but they’d still have to type, to make an oversimplified analogy. (Obviously, it would be far more efficient for AIs to communicate technologically vs. verbally, but maybe society would want to limit that.) What I don’t cover too much in PL is that AIs will likely be able to evolve far more quickly than a biological species. I’m working under the assumption that AIs whose core programming is to essentially be human and protect humanity would try to evolve to become more human (like Data, in a way). This is very optimistic, but I hope it’s something we can achieve if sentient AI comes to fruition. A major point of this story was that AIs were so commonplace and accepted in society that it just wasn’t noteworthy anymore.

So now that I had my ‘unique’ idea, some core operating principles for human-based AI, and some research on the potential future of space travel, I decided to write my story. What I found was, for the story I wanted to tell at least, the science wasn’t as important as I originally thought it would’ve been. I have no doubt that, assuming we survive for a few more centuries, human ingenuity (possibly assisted by AI) will figure out how to travel farther in space. So based on the research I did, I took a few scientific possibilities about space travel, since it’s impossible to completely predict technology 300 years from now, and then started ‘world-building.’ If these technologies existed, how would humanity unfold? I’m a junkie for things like Strategic Forecasting (StratFor), so the societal implications were far more important to me–and my story–than the actual technology. The “I’m not a physicist” quips were a nod to this–not that Ward is me; he’s definitely a fictitious character.

A few people have said I’ve had too much science/tech in the book, several have said that I had the right amount, and a few have said that I didn’t have enough–and that’s fair. Some people want more tech, some people want less, and people are entitled to their opinion (especially if it is politely stated). People are unique individuals who want what they want, and that’s normal, but it’s impossible to please everyone. If I added a lot of science, I would appease some but turn off others. So in short, I focused on what was important to the story I wanted to tell and tried to include enough science and tech to make the universe believable. Besides, I like science and tech a lot, too. 😉

I launched Paradigm Lost in late March of this year. As I’ve mentioned before, it’s done far better than I ever thought it would; but sales are still solidly in the four-figure range. All of that being said, it’s already being pirated on at least one site: mobilism.org, which appears to be run by a gentleman out of Ukraine. However, the person (i.e., Mobilism user) who pirated my book claims to live in the U.S.–and claims to be a disabled veteran, too. 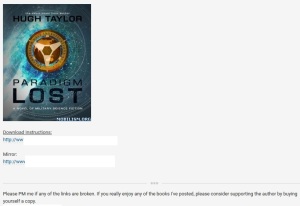 It would be very easy for law enforcement to identify this person, if they have the resources available (unfortunately there is a lot of crime out there). Since the link has likely been used more than ten times, this person has committed a felony:

Maybe I should’ve mentioned in my bio that I was an expert in cybercrime investigations.

I temporarily took Paradigm Lost off of NOOK in order to enter Amazon’s Kindle Direct Publishing (KDP) Select program. I have been extremely skeptical of KDP Select, but I decided to give it a try for 90 days and see what happens.

My apologies took the NOOK crowd, but I didn’t have many sales there, whereas the book has blown my expectations away on Amazon. I anticipate withdrawing Paradigm Lost from KDP Select after 90 days and reintroducing it to NOOK at that time, though. In the meantime, you can read it on any device that can use the free Kindle Reader app!

I’m about one quarter done with the sequel to Paradigm Lost, so I thought I would throw a teaser out there: Book 2 Teaser. I’m more than on track to have this to Monique Happy, my editor, by September, which means that Book 2 (still untitled) will likely launch in October, 2015.

I have some pretty solid plans for Book 3, too. I want to say that it will be out in early 2016, but what I want to do for Book 3 might require more planning and revisions than the first two books. So I’ll wait until Book 2 is out before making any promises!

Anyway, I hope you like the teaser. If you do, please share with others, and let them know that Paradigm Lost is still for sale at Amazon and for NOOK!